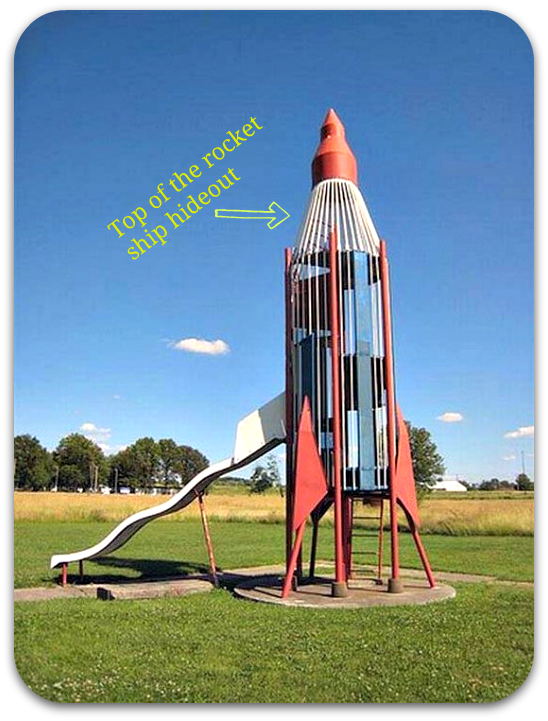 I have some memories burned into my brain from childhood. It’s hit or miss if those are happy or disturbing memories and what they are about. I remember they showed us videos in elementary school of overdose victims partially decomposing in bathtubs. Just hearing the word heroin or cocaine gives me a Clockwork Orange/Fight-Club-Tyler-film-edit flashback effect in my brain.
On a happier note, I always had these subconscious, very fond memories of the rocket ship in our playground – and my mind was blown when I found this picture of the same model playground rocket ship on retronaut of it! There was something really difficult about getting up into that capsule at the top. I forget what made it so hard, but it was something that was slightly challenging and very scary for a little kid, and I was proud when I could finally do it. Maybe you just had to pull yourself up – I forget exactly. Once you made it up there you’d usually rest and just sit up there in the capsule hide-out and talk, because it was an accomplishment to be up there, and you were kind of a badass if you made it.
The extra crazy thing people would do, which I never had the courage to do, is slip through the bars and then be climbing on the OUTSIDE of the rocket! You might not be able to tell from this picture – but that rocket is very very tall. If you fell from the top of it, you’d probably die. That’s the stuff we’d do in the late 70’s before we all became helicopter parents ourselves. The burst of nostalgia I get from this picture is like a shot of dopamine in my brain. I miss you dangerous rocket ship.